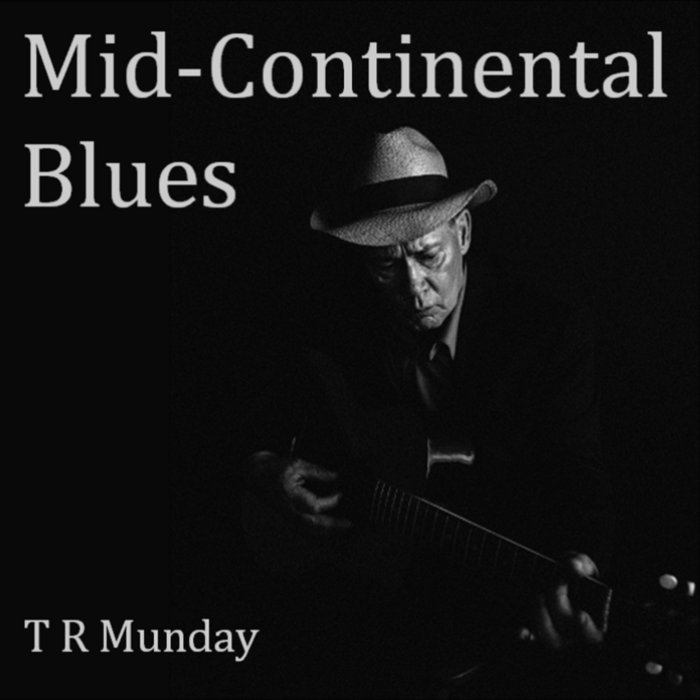 The middle of the North American continent has long been the home of the Blues. From the Mississippi Delta and the cotton and farm fields of the deep South, north to Chicago and Detroit, and west to Austin and Kansas City, the Blues originated there and are still going strong. This album contains ten new, original Country Blues and Delta Blues songs plus T R Munday's versions of two traditional songs. These down home Blues are heavy on acoustic guitar, harmonica and his slow, deep singing.

Don't look for songs to play at your wedding reception here. Two songs about dying, one about a grave, one train wreck, two failed relationships, one about crop pestilence, one about coal mining, one that contains instructions on how to plow with a mule and one that describes the pandemonium that is set off when someone knocks on his door don't seem to include any songs suitable for weddings. You won't find "Stairway to Heaven" on the track list.

Downloads of the digital album are being offered through Bandcamp on the basis of 'name your price (no minimum)' in the great tradition of Chicago's Maxwell Street open air music. Pay if you can, but if you cannot, enjoy the music anyway, and if you do enjoy the music, tell a friend or send it as a gift. Maxwell Street in Chicago was a place for Bluesmen and other musicians to perform from the 1930s until the last open air performance in the year 2000. Its heyday was from the late 1940s until the early 1970s. It was a remarkable place.

Tee's unpublished, unreleased song "O-Joe the Catfish" went to the semi-finals of the International Songwriter's Competition in 2019.
T. R. Munday resides in Northern Illinois, by way of Texas and California.
Musically, he has been most influenced by Mississippi John Hurt, Johnny Cash, and a whole host of Mississippi Delta and Chicago Bluesmen. ... more

Bandcamp Daily  your guide to the world of Bandcamp